Company Fraudsters Convicted For Stealing Over £500,000 From UK Businesses

Company fraudsters convicted for stealing over £500,000 from UK businesses

Two fraudulent businessmen were sentenced last Friday (9th May 2014) to 40 months in prison after pleading guilty to fraudulent trading, conspiracy to steal and conspiracy to transfer criminal property. The two men – Gavin Mellor and Michael Anderson, set up several fraudulent companies between November 2010 and June 2012 – Latec International UK, Blothall Ltd and Ludlum Supplies - before embarking on a nationwide scam that resulted in stealing over £500,000 worth of goods from several legitimate businesses.

Among the victims of the case was Kite Packaging, which has several branches across the UK and an online business based in Coventry. The scammers contacted the packaging company in January 2012 and were given access to a credit account facility as they had filed false company accounts with Companies House, and therefore passed through a standard credit check. They then proceeded to steal £3,600 in packaging goods from the business. 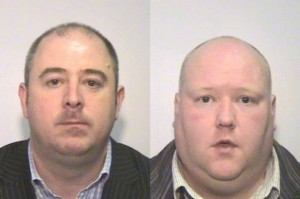 After being hit by the scam, the employee-owned packaging company proceeded to spread the word about the fraudulent activity with the help of local press, including the BBC, and by contacting credit checking agencies and fellow contacts in the supply chain, such as warehouses and carriers. Kite Packaging also offered information and witness statements to the Greater Manchester Police, determined to protect other companies from the scam and see the criminals convicted.

During the follow up, Mellor and Anderson continued to scam other companies, and when Latec International left three steel firms unpaid in April 2012 the police launched full investigations which lead to the pair’s arrest in June 2012. The Volume Fraud team uncovered more and more unpaid debts and discovered more than 50 legitimate businesses were affected by the theft.

During the investigations Kite Packaging’s Managing Partner, Gavin Ashe, spoke to well-known radio presenter Annie Othen back in May 2012 to raise awareness about the issue and warn against the fraudulent companies, an interview which helped to push the case even further forward in to the public domain. Following the recent sentencing of the two men Gavin spoke out again to say:

“This is a great result for us and so many other innocent firms that were affected by Mellor and Anderson’s crimes. I would urge all companies who have been scammed to step forward and fight for tighter measures on people who set up hoax companies with the intention to steal as much as they can. Today’s result speaks volumes, and will protect businesses so that they can concentrate on looking after their real customers.”