The biggest packaging buying day of the year falls on Monday 24th November...

Peak Packaging Monday – which falls on 24th November – is a key date for UK B2B markets in the final quarter of the year, particularly for the packaging industry as a whole and retailers. But why is this the most popular day of the year to purchase packaging?

The research compiled about the rise in consumer spending during the Christmas period, and in particular online spending, is endless. During Q4 (which typically runs from September – December) there is a significant uplift in sales, and according to the Centre for Retail Research UK, spending in December typically goes up by an average of 60%. To translate this to online spending, Experian has estimated that UK consumers will spend a whopping 400 million hours online shopping in December, accounting for £10.5 billion in retail revenue.

Cyber Monday is a relatively new trend in the UK, falling on the first Monday in December and described as the ‘biggest shopping day of the year’ by retailers. Relative to Thanksgiving holiday in the US (Cyber Monday is the first Monday after Thanksgiving), the concept has grown in visibility in the UK, with Amazon alone generating £4.1 million in sales revenue on 2nd December 2013. IBM reported that during the course of Cyber Monday last year online sales rose by 31.6% and with an average order value of £81.17 per transaction. 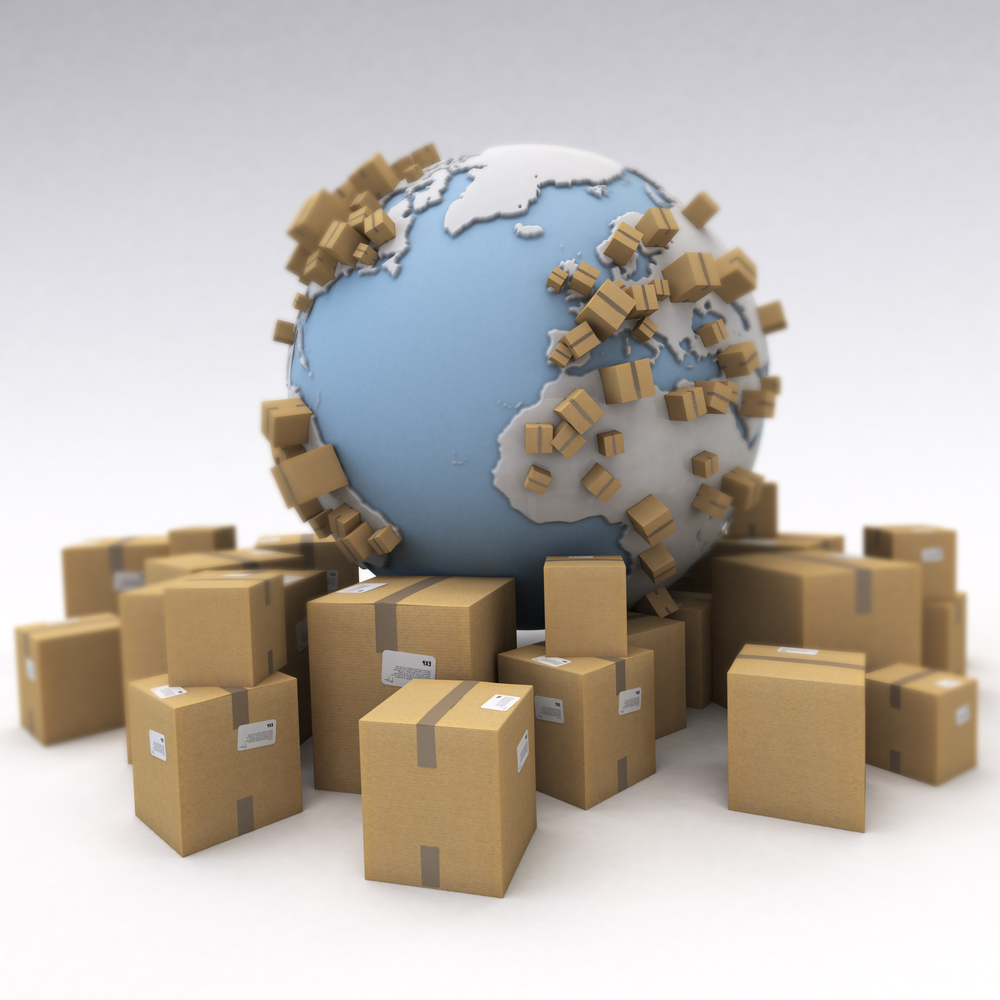 But what does this mean for the B2B market? More spending by consumers mean more parcels to be shipped, and Royal Mail has produced some interesting statistics to reflect this trend. Their research shows 56% of online shoppers said this was their main method for Christmas shopping, accounting for an average of 77% of their total spend – and the majority of businesses are using the service to ship their goods, with 70% of deliveries over the festive period being delivered by Royal Mail.

To cope with the Christmas rush Royal Mail recently announced, for the fourth consecutive year, that it will be opening 10 temporary parcel sorting centres across the UK for November and December 2014. This will support the company’s recent employment drive to hire 19,000 seasonal workers to help with the administration, sorting and distribution of over 50 million items (including letters and parcels) per day.

These parcels, sent to customers from retailers and loved ones, all need to be protected. Packaging distributors like Kite Packaging, with an online operation based in Coventry, have seen a 25% uplift in order activity during November year-on-year, since they started in 2004. Jake Kirk, Managing Partner of the online business said “As the e-commerce market continues to grow, we as a packaging business have seen a huge uplift in order activity around the November – December period as people prepare for Christmas. Typical products are things like tape, boxes and mailing bags, and as well as the number of orders growing we also observe a significant increase in order value. On average November shows a 40% increase in turnover when compared with the rest of the year.”

These figures come as no surprise to the manufacturers of packaging products, who supply to distributors like Kite. Figures from the UK’s leading corrugated board manufacturer, of which 80% of its clients are large retailers such as supermarkets, distributors, fulfilment houses and leading e-commerce platforms, show a 30-35% increase in sales in Q4. The impact of this on manufacturing is significant, and because corrugators work with specialist machinery that require months of training, hiring seasonal temporary workers isn’t an option. Instead a ‘forward-making’ strategy has been implemented, with additional product being made during quieter periods, and stored ready for the Q4 uplift. Facilities operate 24 hours a day, with all workers on standby during the Christmas shut-down in case a sudden supply is needed.

Mailing houses tend to also feel the pressure during the Christmas period, particularly when large contracts such as Christmas catalogue businesses are reaching their busiest time. Mailing out these types of goods, and other products such as small gifts and toys, require mailing bags. VP Papier, Europe’s leading supplier of paper-based mailing products, see a typical increase of 30-40% in sales, and other suppliers such as Jiffy and Sansetsu work in the same way as corrugators, building up stock throughout the year and storing it ready for the busy period.

Packaging, a disposable product, one we might not even think about, is however essential to the day-to-day running of thousands of businesses across the UK.

Peak Packaging Monday will no doubt be successful as ever this year, with distributors and suppliers close to planning stock and their distribution strategies ready to tackle the increase. National UK carriers will also be feeling the surge, with Peak Packaging Day marking the start of their busy period, with a 40% average increase in delivery demand – up to 80% during the busiest week compared to the annual off-peak average.

Kite Packaging are already set to have the most successful Peak Packaging Monday since it began trading online in 2004, with a spokesman from the company commenting “Peak Packaging Monday is when we can really judge how well retailers are doing in the run up to Christmas, high volume orders mean a healthy projection for their end of year sales and is only good news for B2B organisations such as ourselves. We have been incredibly focused on product this year and are confident our range and competitive pricing model will make us an attractive offering during the busy purchasing period for businesses.” 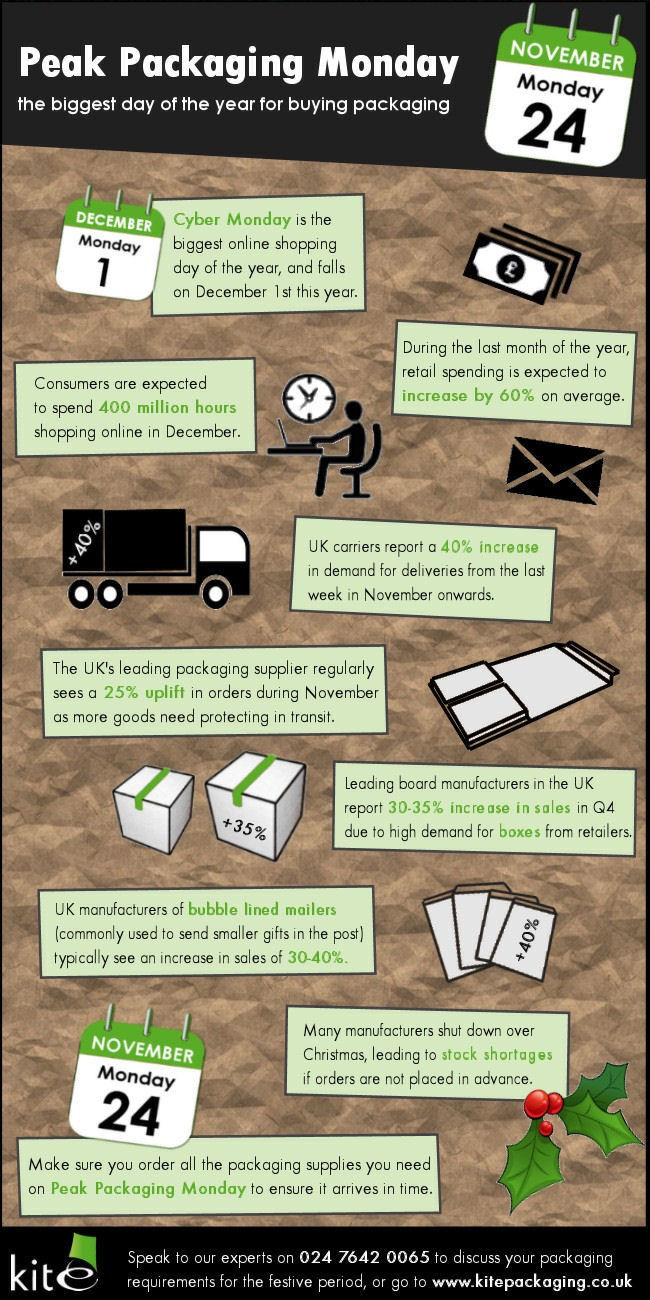