‘Peak Packaging Monday’ is here! This day has been identified by Kite Packaging as being the busiest day of the year for businesses to purchase packaging in preparation for the two busiest consumer shopping days of the year, Black Friday and Cyber Monday. The year on year growth on both these days is phenomenal and as a passionate e-commerce packaging company we want to take a trip back to where it all began and remind ourselves of some of the key dates in which some ecommerce milestones were reached. 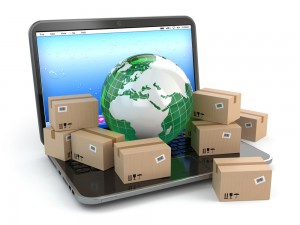 Aldrich in the UK in 1979. He connected a modified domestic TV to a real-time transaction processing computer via a domestic telephone line. It found its first applications in the business-to-business arena in 1981, enabling travel agents to book holidays for customers and motor dealers to locate cars.

Then in August 1994, the first online monetary transaction was said to have been on Dan Kohn’s website ‘NetMarket’. He sold a Sting CD to a friend in Philadelphia. A credit card was used to pay for the $12.48 CD and he used data encryption software to send his credit card number securely. However, another website called The Internet Shopping Network, claims that it started selling computer equipment online about a month before.

The internet has bought about some of the biggest shopping names in the history of retail, with companies like Amazon and Ebay seeing rapid growth and fundamentally influencing change in consumer shopping habits.   Amazon was started in 1995, with the first sale taking place from Jeff Bezos’ Seattle garage, by a man called John Wainwright who bought a book costing $27.95. Today Amazon is one of the richest companies in the world, passing the half-a-trillion mark in July 2017.

Ebay was also launched in 1995 by Pierre Omidyar, and the first item sold was Pierre’s broken laser pointer for which he was paid the princely sum of $14. As of May 2017 Ebay was worth approximately $36.6 billion.

Online sales in the UK exceeded £130 billion in 2016 which was £18bn more that the amount spent online in 2015 and judging by the way that things are going; we wouldn’t be surprised to see more exceptional growth in to 2017.